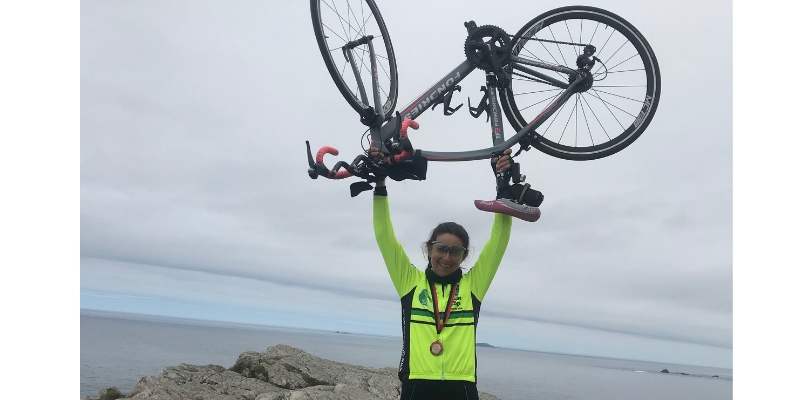 My Mizen to Malin Head Journey

I like to do at least one charity event every year and this year I combined a goal of mine – cycling from Mizen Head (the most southerly point in Ireland) to Malin Head (the most northerly) – with raising funds for the Irish Guide Dogs.

The training for the event went well and each ride I did over 100km gave me more confidence. I wasn’t afraid of the daily distances (longest being 140km) but I was unsure of how my legs would feel with cumulative long rides as I haven’t done anything like that before. My husband assured me that I would get stronger by the day but I wasn’t so sure!

The week before the event, I held my main fundraising event which was a great success. It was a women’s wellbeing day in the Ballygarry Hotel. I was very grateful to all the therapists and practitioners who volunteered their time and expertise on the day. My mum was due to speak at the event but got a stroke on the morning of the event so it was challenging for me to get through the day. I left a few times to rush over to the hospital and see her – thankfully she was in good hands and my husband stayed with her and other family members came. So a hectic day and a hectic week followed. Thankfully, my mum is on the mend now. There was also a lot of organizing to do for my kids (prepping lunches and dinners, sorting playdates, clothes for the week etc.)

For a while that week I wasn’t sure if I would do the cycle but after raising all the funds and being assured by family they would take care of my mum I decided to go in the end. So here is a summary of how the week went:

The group met up at the Irish Guide Dog centre in Cork – there was a great buzz of excitement and anticipation as we boarded the bus for the journey to Mizen Head. It was cool and windy at Malin Head as we all prepared to start the cycle. I ended up cycling a good part of this spin by myself which made it more challenging. Although it was a short ride compared to other days, I was glad when it was over as I was feeling tired due to hectic week I had. That evening as we walked around Bantry my legs felt as if they had ridden 100 rather than 50km! I was hoping it was just as a result of the demands of the previous week and that after a good night’s sleep I would be fine! I was certainly going to need to get my zip back as we were going from Bantry to Tralee over the Caha pass and Molls gap the next day. 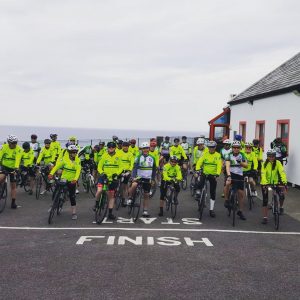 This was a fab day – it was a beautiful morning in Bantry and it stayed like that all day.
There was a headwind most of the way but the amazing scenery worked well as a distraction! We headed to Glengarriff, then up over the Healy pass to Kenmare, and had a short stop for a bowl of soup.   Then to up to Molls gap and onto Killarney. At this point my husband decided that the back roads to Farranfore would be a lot safer – it ended up being 5km longer plus a number of hills which on tired legs wasn’t welcomed! The bonus was we got to meet our kids in Farranfore as they came out to support us. We then rode into a headwind to Tralee but luckily had a great group working together and we finally finished in Tralee. It was lovely to get home that evening to see my kids and my mum and it seemed to shorten the time we were away. I was feeling better after this tough ride than I had the previous day so that was a good sign. I was still feeling the effect of a long hard spin though and slept well that night : ) 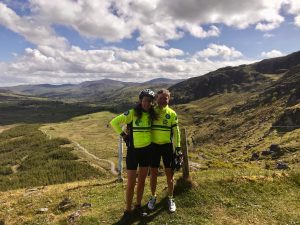 There is a great buzz getting all the luggage packed up and bikes ready in the mornings and thankfully, everyone was always ready to leave on time. In most towns we had a garda escort to lead us out of the towns safely. Enjoyed having that in Tralee where normally we would have to stop and start at every light and roundabout.

We were blessed again with the weather on this day. It was dry and sunny with a head wind but not as strong as the previous day. We went from Tralee to Listowel in a nice big group, stopped for a cuppa and then onto Tarbert for the ferry to Killimer. I enjoyed riding with an 80 year old on the road to Tarbert – so inspiring!
The ferry was a nice chance to meet some new people (you tend to get to know the people you ride with well but those in other groups not so well). We had some lovely scenic roads by the coast and then we hit a road closed sign! We had to detour over back bumpy roads which weren’t ideal! My saddle comfort was at a minimum at this stage! Not sure how much extra we rode (Garmin died!) but it was nice to reach Spanish Point as I was hungry for some solid food. The sun was still shining so we had a nice walk on the beach after. 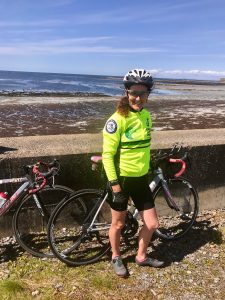 ‘Wow’ just about sums up this dat! Even though it was 105km on tired legs, it was the most spectacular scenery, made even more amazing by the beautiful weather. The water was calm, no wind, perfect sunshine – just glorious. Thankfully this was the day that hubby and I decided to have a leisurely spin and really soaked up all the views. It was constant beauty on the ride. It was nice to take a break from riding in a group too as you are constantly focusing on working well as a group. I even got to stop in the fab Rock Shop and bought myself a ring : ) 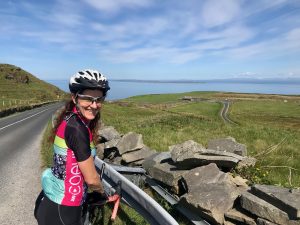 Today was the the day I was least looking forward to as it was 140km on the N17, one long drag with little to distract.
Luckily the weather stayed dry and a group of us worked together for the full ride. This made it much more manageable and enjoyable. We held a steady average pace of 27km/hr.
Starting out I was confident I could do the distances but wasn’t sure how my legs would be doing long rides day after day. I seem to be getting stronger day by day which is great (yes, hubby was right!).
Doing well food wise too, eating loads. Having superfoods and turmeric to aid recovery and lots of energy bars and bananas en route. : ) As soon as we finish each day, Bernard and I go in search of good food. We usually end up eating later with the group too as hunger catches up again! 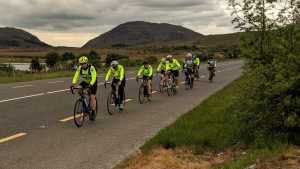 This day seems a bit of a blur as I don’t remember much from it! I think I was starting to feel the cumulative effect of the long rides on the legs but I was still able to hang in there with the ‘lads’ and we rode as a group all the way. Saddle comfort was a distant memory too as there didn’t seem to be any spot to find a good position! There was a fun downhill into Letterkenny so enjoyed flying down that. We just made it in time to the lovely vegan restaurant in Letterkenny for some delicious salads so that was a bonus! 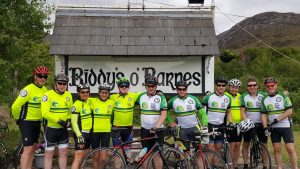 Today was the first day we had rain, it started just as we were leaving town so unfortunately I didn’t have my rainjacket on and got very cold. Had a few stops along the way to regroup which didn’t help as just got colder! We missed most of the views in Donegal as a result but enjoyed all the rolling up and down hills and varying terrain after the last couple of days of straight roads!
Thankfully we were treated to sunshine for the finish at Malin Head – it was an epic finish up a steep climb. There were great celebrations and even the tourists were cheering everyone in. Delighted to have finished and enjoyed the great company along the way.

There was a great buzz amongst everyone and an enjoyable night. The next day we faced the long drive back to Cork and realised the distances we had travelled by bike! Overall it was a great event and I am delighted I did it and that the Irish Guide Dogs benefited. We had a few people who were visually impaired on the trip and they were all so inspiring. One guy I met, Mark, lost 92% of his sight suddenly at 19 and hasn’t sat still since. He and many others have completed the Mizen to Malin head cycle on tandem bikes – if I was tired, I just thought of them! 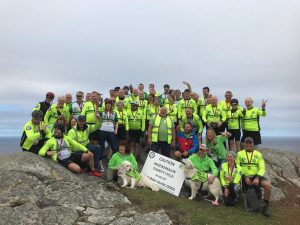