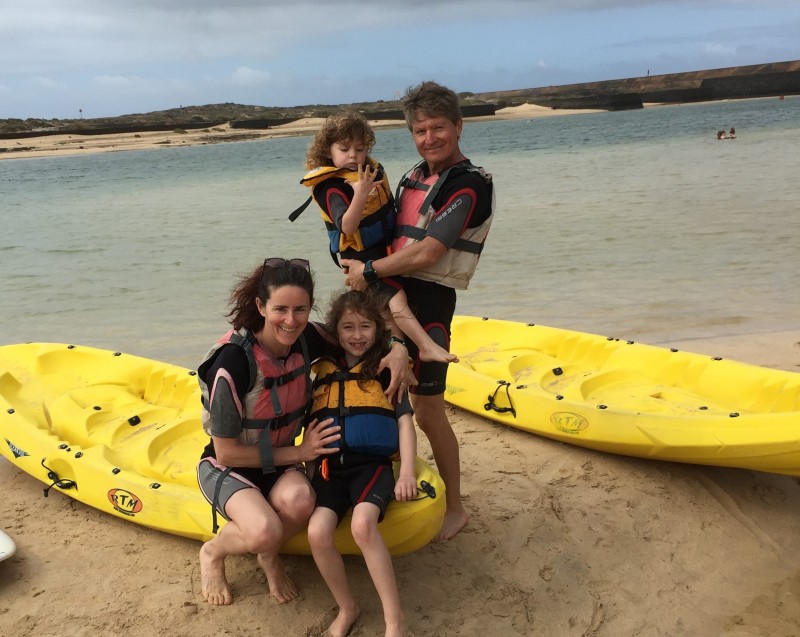 Holiday with a difference

I had always been aware of Club La Santa in Lanzarote but didn’t know a lot about it. When we were looking for a holiday for mid-term I decided to check it out and was impressed with what I saw. I didn’t expect they would have last minute availability but surprisingly they did so off we went…

The holiday ended up being way more than we expected – for any level of fitness enthusiast it really is just amazing. The facilities are first class and include three 50m swimming pools, an athletics track, 10 tennis courts, a watersports center, open air studios, dance studios etc. Plus they have lots of equipment for hire ranging from road bikes to beach toys for kids. 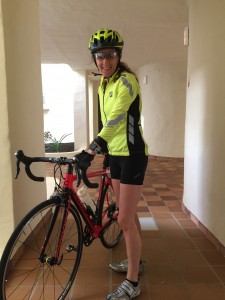 The best part though is the range of classes that are on offer from 8am to 8pm – about 40 classes a day! All kinds of everything from aerial yoga to windsurfing to dance to swim instruction. Most classes are suitable for all levels but there are some that are specifically for beginners, intermediate or advanced, particularly the instruction classes. There are also some classes especially for kids.

The hardest part is choosing what you want to do (if you are like me anyway and want to do everything!) – the good part is you have to plan a little in advance 1) because classes fill up and 2) because we have kids so had to plan around the times they were in camp and the activities they wanted to do. The resort has an app which makes all this easy to do although when I was there the wifi wasn’t the best. Over the week, I enjoyed a range of activities such as Stand up Paddling, tennis instruction, open water swimming, biking, aerial yoga, cycling, pulsing barre, running and swim instruction. You can get an idea of the range of classes on a typical day in the photo below. 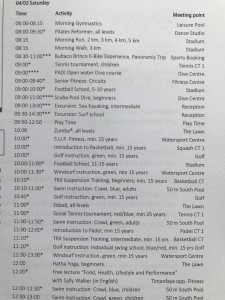 My kids loved it too – my 4 year old wanted to live there! They had an option for a crèche style environment for 3 hours every morning (for 3-12yr olds) – that was the part I was least impressed with as although there were lots of toys for kids to play with there were no interactive games or activities, the minders just supervised. In the afternoons though there were more active adventures such as treasure hunts, watersports, Olympic style fun and beach time which the kids enjoyed. My older girl, who is 8, also had some instruction classes available for her age so she did tennis, swimming and soccer instruction. They also had a lovely playground, kids pool and crazy golf so lots of options for the kids. 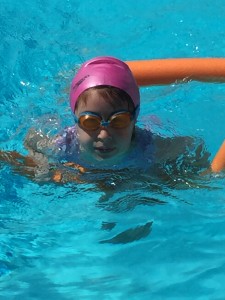 Evening entertainment was fun and varied, we only went to a few though as our days were so full we went to bed earlier that we might on most other types of holidays. They had a great kids show one night that my little girl took part in and really enjoyed.

Food was varied enough onsite for a week with 4 restaurants including one buffet style restaurant. As vegans we were well enough catered for with options in each restaurant and the buffet had vegan signs on the suitable options (was impressed with that!). Apartments are self-catering and there is a supermarket onsite so that was handy too although expensive. 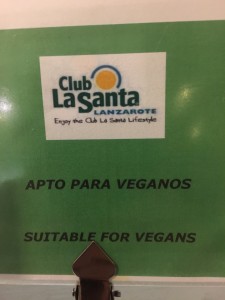 The island itself also has vegan options if you fancy going further afield but for a week we thought we would be fine on site so didn’t bother checking out happycow.com as we normally do while traveling. We did just happen upon a lovely vegan café when out and about one day which was a nice surprise and also ended up meeting a very nice vegan couple from Cork – small world!

Club La Santa is Danish owned which explains the large percentage of Danish visitors (about 50%), it is estimated that another 30% are British, 10% German and the remaining 10% a mix of nationalities. A lot of the staff there are Danish too and for the most part were a very friendly and outgoing bunch. So many people I met were return visitors –there is an 87% return rate and on average people have stayed there 7 times! That speaks volumes really and for someone who wouldn’t be in a hurry back to the same place a second time, I would gladly return there next week : ) 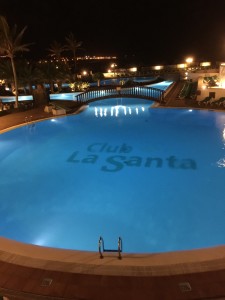 – Bring warm clothing (or lots of layers) for the evening. We went the first week in March and although we were in shorts and t-shirts during the day, the evenings got very cold (jeans and jacket required). Also during the day, although it was sunny there was always a breeze blowing, so light layers are handy too (at least in the spring time).

– It is worth hiring a car for the time you are there. We didn’t as knew we had the option to hire a car for a day or two in Club La Santa. It would have been cheaper (and handy for spins to shops/restaurants) to have hired a car for the week as a taxi to and from the airport was €80 which is about what car hire for the week costs.

– Spend a little time in advance thinking about the types of activities you would like to do. You can find the weekly schedules on Club La Santa’s website and the schedule for the following week usually comes out the Thursday before hand. You can’t book activities until you are onsite but if you have an idea of what you want to do it will save time when you get there.

– Take advantage of the instruction classes as these are all included. Lessons are offered in golf, tennis, windsurfing, swimming, football etc so worth scheduling a few of those into your week.

– Everyone goes! I was expecting it to be full of elite athletes but there was everyone from grannies and granddads to families, fitness enthusiasts to world champions – it just seems to work for everyone.

– Consider scheduling in a day to tour the island – lots of nice places to visit such as the Volcano park and Playa Blanca. Also the temperature seems to be a few degrees warmer in the south of the island so if you want a beach day, definitely head south.

– Both Aer Lingus and Ryanair fly from Cork to Lanzorote so worth checking the times of both as when we were going, the outbound flight with Ryanair is a good time but the return flight was very early (especially if you have young kids) so next time I would look at returning with Aer Lingus.

– Have a good look at the price schedule online as there are certain dates that the prices double or half. Just by changing out dates by a day we got a much cheaper rate.

You can find out more at www.clublasanta.com or feel free to message me if you have specific questions : )